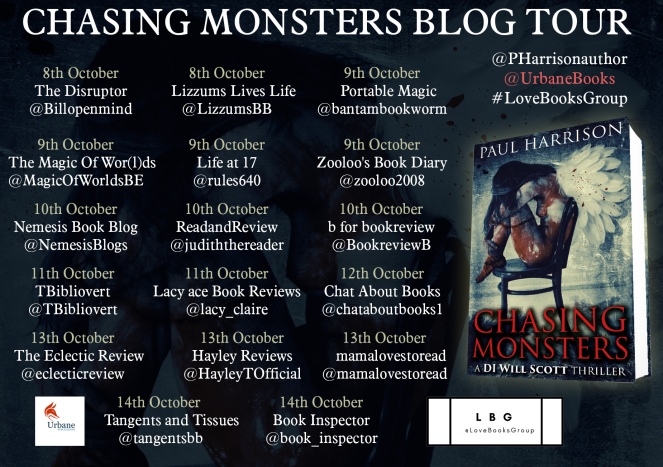 Hey guys. Today I’m bringing you a review on this new release from Urbane Books – Chasing Monsters by Paul Harrison. It came out on the 4th October 2018 and is a crime thriller, available in both Paperback and Kindle formats – to buy and to borrow as part of Kindle Unlimited.
A pretty cool fun fact about the author is that he has spent a lot of his professional life working within the UK’s criminal justice system, primarily as a police officer, however he has also worked as a dog handler and criminal profiler, as well as working with the (now defunct) FBI’s Behavioural Science Unit in Quantico.

The first thrilling book in the Will Scott series.

In a sleepy northern seaside resort, The Eastborough Police Force is shocked into action when a heavily mutilated body is found in a quiet suburb. Murder rarely happens in these parts. Within a short space of time, the body count begins to rise rapidly, as a serial killer runs amok.

DI Will Scott is tasked with finding the murderer. In so doing he treads paths he never expected to traverse and uncovers a web of deceit where no one can be trusted.

The killer relentlessly continues to strike terror across the community, but without warning, the killing ground changes. Where will the killer strike next …?

The first thing I have to note about this book, is the book itself. The cover is gorgeous and very suitable for the book. It’s only now I’ve finished the book in it’s entirety, that I feel I really understand it. Many books have fantastic covers, but there are few I feel have had this much thought go in to them. There are also themed chapter pages and wings throughout which is a lovely touch and matches very well with an element revealed later in the book.

The book jumps right in with finding a person on the beach and a lot of dialogue, using a lot of very British lingo which US readers may have a bit of trouble with – however, I believe it to be quite an accurate representation how many of us (English folk) speak. This sort of fades out though and the writing relaxes a little more, or it feels that way to myself at least.

The start feels quite structured and I struggled with it. This is character, here are details about character. It felt a little overwhelming and “for the sake of it” but things were upwards once these details were disclosed to the reader and everything felt like it was advancing the story. I may have struggled with the start, but by the end, I couldn’t put it down.

It doesn’t take too long for us to get to the first proper crime scene and this really had me hanging on. Harrison has you hanging on and makes you work for the details. The built up suspense is excellent and it was from this point that I realised he had me hooked. The nature of the corpses was a grim one and there are a few elements that sound like implausible scenarios and unrealistic reactions for experienced police officers; when the team go through the crime scene later on is a prime example. It really bugged me at the time, but it’s pretty minor in the grand scheme of things and by the next crime, I’d forgotten all about it.

The book is well paced and becomes quite easy to read from cover to cover. There are constantly events happening with no “lull” that would be convenient for the police. There are force politics involved, as with many crime books, however, not the expected “ah, budgets” and things like that. Very different to the usual office politics I’ve come to expect from crime fiction.

It’s quite a ride. The book has you question your own morality when you discover the victims are bad people themselves. Did they deserve to be murdered? Is it justice? Should we feel sympathy regardless or quietly celebrate? It really gives you a lot to think about.

I avoid mentioning mid-end books of spoilers, however I can talk about this without context, so it’s spoiler free. Later in the book, it feels like the story is being wrapped up and the premise is being set for a second installment (which I believe there will be) but then more action happens. It was incredibly intense, more so than the rest of the book had been and I ended up staying awake late to finish it because I absolutely had to know. It wasn’t what I was expecting and I found it absolutely gripping; a stark contrast to when I had first started reading the book and didn’t feel particularly excited about it – it wasn’t bad, it just didn’t stand out. It came along in leaps and bounds and became something I didn’t expect at all. It turned out to be a phenomenal read and one that I would highly recommend. Never had I read a crime thriller that has had me think so much about myself as well as the characters and the system that they operate in.

I really hope Harrison does follow through with a sequel and that it’s as excellent as this book was. I highly anticipate it and I know I’ll be reading it for sure!